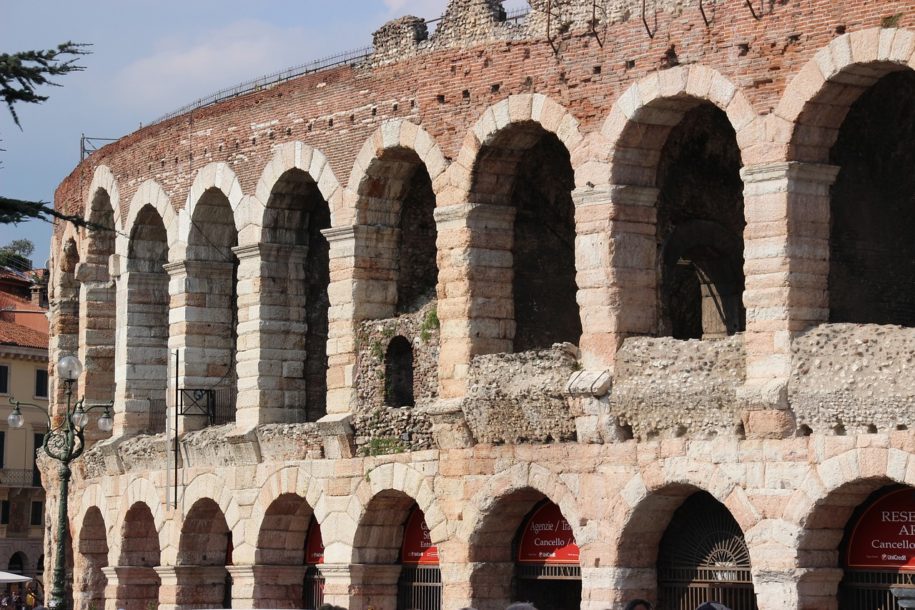 Great acoustics for live shows, an amazing venue, an ancient Roman amphitheater – just like Colosseum, but you are in the center of Verona. Yes, I said live shows because the Verona Arena is an open-air venue where you can enjoy beautiful opera in summer and pop and rock concerts throughout the whole year. Have you ever heard of  Pearl Jam and Adele? The grunge band performed here in 2000 and Adele played her beautiful songs here just a couple of years ago.

From ludi to Opera & rock. History & art in your tour of Italy

This very well-preserved amphitheater was built in the first century AD and is one of the best-preserved ancient structures of its kind. Today its capacity is about 15, 000 people, but in ancient times it housed twice as much. Located in the historic center today, the arena was in fact located just outside the city’s walls in antiquity – helping us to understand just how much the city has grown over time!

The arena has seen everything: where popstars walk today, gladiators did the same thousands of years ago (although with a little bit more violence!) Ancient ludi – public games held for the benefit and entertainment of the Roman people – were so famous that people often came from far away to witness the shows.

Traditionally, these ludi were provided by the state and were an essential part of festivals and holidays that included public entertainment, much like county fairs. Some of the most amazing information I‘ve found about these games are about the involvement of women. Their participation is touched on in a very interesting Catalan essay – Mujeres en la arena. Participación femenina en los ludi circenses –  by Marta Ortega Balanza. Here’s an extract of the article:

“Whereas the reputation and fascination for gladiators has come down to us via popular movies and books, the fact that there were also female gladiators is relatively unknown fact. Women’s participation  in circus and amphitheatre shows was diverse: these women were sponsors of the games, owners of gladiators, actresses or musicians performing in shows, or prostitutes to the service of participants or assistants, or fans of gladiators.”

In my opinion, it’s amazing that some of the ancient Roman amphitheaters are still used today for concerts, operas, bullfights, and more. Thousands of years after they were built! Don’t you agree?

A tour of Italy worthy of its name – including ancient Roman art and architecture – should take you to Verona and to this lovely amphitheater in addition to the Colosseum.

As already said, amphitheaters were used for different events. Do your best, try to imagine those events while visiting the grandeur of this theatre. The best part of traveling is when you are absorbed in a place. When you live an experience and don’t just visit a monument.

Verona was built and used as a base for controlling the territories of the north of the country. The first settlements date back to prehistoric times. This city was a strategic and commercial center and enjoyed great cultural development during the Roman empire. Roman ruins are incorporated into the everyday fabric of the modern infrastructure so you will be able to see the footprints of ancient history all around the city. Verona stood at the crossroads of the Roman Empire. It was at the junction of main roads between Italy and northern Europe to be more precise and the Romans called it “the gate to the north”. In fact, thanks to its geographical position, it was a perfect political and commercial center.

Did you know that the Romans built approximately 230 amphitheaters all over the Roman empire?

Beautiful pink and white limestone from the nearby Valpolicella region makes the Verona Arena unique among all Roman amphitheaters. The entire facade of the arena was originally made of these stones. In the Middle Ages, stones from the Arena were taken to construct other buildings and to date, you can see only a fragment of that Facade. A small section is enough to imagine how impressive the visual impact in the past would have been.

In my opinion, few cities are more romantic than Italy’s Verona. The place where Shakespeare set his ultimate romantic tragedy, Romeo & Juliet, will make you fall in love with Italy,

Include a visit to The Verona Arena on your tour of Italy, contact our team of experts on our Custom Tours page here.