Ancient Rome With Your Private Driver

Ancient Rome With Your Private Driver

Find out why visitors love our tours!

Travel in style and comfort across Italy

Rome is full of historic treasures that many tourists will never get to experience as they just want to stay in the center of the city. That’s why we have created this Ancient Rome driving tour to give our clients the opportunity to broaden their horizons, get off the beaten track, away from the crowds and discover some truly incredible ancient Roman sites in comfort and luxury with a private driver and guide.

Some of the sites visited with your guide include:

Ancient Rome is not just about the Colosseum and Roman Forum; some of the city’s most interesting sites are found in areas that can’t be accessed so easily without a car to take you there and a private guide to bring the history and significance of these locations to life for you.

In our fully air-conditioned vehicle, you will head outside the ancient city walls to learn all about how ancient Romans worked and lived: from their greatest engineering feats to their daily habits and traditions.

What Ancient Sites Will You Visit With Your Private Driver & Guide?

Did you know Rome has its very own pyramid? Well, that is just one of the things you’ll discover on our driving tour!

Your expert guide will take you to places such as the oft-forgotten ancient cattle markets of Rome, the Forio Boario, Circus Maximus, and the Aventine Hill, the home of the elite in both ancient and modern times.

We will then travel outside of the city to the Park of the Aqueducts and the famous Appian Way, where you will have the opportunity to walk on the ancient road that dates back to 312 BC.

Further on you will visit the 1st century Roman Pyramid of Cestius and head into the district of Testaccio, the warehouse district of classical Rome. Its archeological site, Monte Testaccio, looks like a hill but is actually a huge mound of ancient Roman broken urns, today housing a park as well as bars and restaurants. The tour finishes with one of the most panoramic vistas of Rome: the Janiculum Hill.

Who Is Our Driving Tour of Ancient Rome For?

This is the perfect tour for anyone that is looking for something other than the standard postcard version of the Eternal City.

Whilst these sites are generally only accessible by vehicle these days, we still put you and your family’s comfort first and we can assure you that you will be chauffeured in comfort and style!

Moreover, if your party contains either small children or members with mobility issues then our driving tour is ideally suited to their needs.

Collection & drop off at your hotel.

Meet Your Private Guide For This Tour

Amy will be your licensed guide in Rome. A history buff and local Roman citizen, Amy is the perfect guide to lead the way!

“Get out of Rome and away from the tourists on this relaxing tour of some of my favorite local spots!”

Any questions about this Rome tour? Contact Amy below, she’s always happy to help. 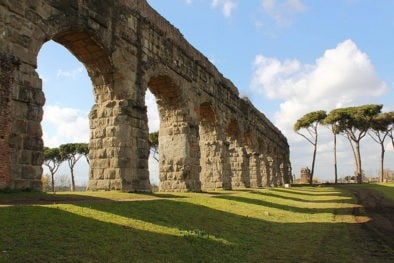 Click here to reserve your dates now.
Amazing! There is no better way to see Rome. Amy's knowledge is second to none and I cannot recommend luxe travel enough. From the onset, everything was organized for us and it really was a truly amazing experience.
NikiUSA
Absolutely Amazing! I visited Rome in July 2020 and booked a Rome tour with Amy before Arriving. Amy was an excellent communicator before my tour making sure the itinerary matched up to my wishes.
JamieUSA
Amy gave us a most consummate Rome in a Day tour which we thoroughly enjoyed! She initially sought to establish our particular interests and then tailored her tour accordingly. The resources she used gave us an excellent sense of the Colosseum and the Forum in their former glory, compared with now.
CateUSA
We met the amazing Amy when we arrived in Rome, first with the “Strolling Rome’s Heart” tour. We had been in Rome for 24 hours and walked those same streets but what a difference having a guide like Amy and her team makes. Amy has so much to share with us, so much history and so many anecdotes and delivered in such an engaging way.
LeeUSA
I booked two private tours in Rome and Florence, and I sure am glad I used this company! Their guides speak excellent English and were incredibly knowledgeable. I also felt like I made two new friends while I was there! Look nowhere else if traveling to these cities.
TracyUSA
Previous
Next

Inquire About Our Private Driven Tour of Ancient Rome Here

Our tours are kept to small private groups to provide the best possible experience for our clients. As such we are able to customize our itineraries to suit your interests, needs, and requirements.

To discuss this tour or any changes you would like to make simply complete the form below.

Explore some of our other tours below, or contact our team to create your own bespoke private experience

Rome In A Day

An exclusive tour of a fascinating ancient Roman city

Our Private Tours of Italy

You can find out more about which cookies we are using or switch them off in settings.

This website uses cookies so that we can provide you with the best user experience possible. Cookie information is stored in your browser and performs functions such as recognising you when you return to our website and helping our team to understand which sections of the website you find most interesting and useful.

Strictly Necessary Cookie should be enabled at all times so that we can save your preferences for cookie settings.

If you disable this cookie, we will not be able to save your preferences. This means that every time you visit this website you will need to enable or disable cookies again.

This website uses Google Analytics to collect anonymous information such as the number of visitors to the site, and the most popular pages.

Please enable Strictly Necessary Cookies first so that we can save your preferences!